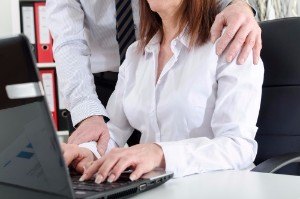 Sexual harassment is a form of sex discrimination and constitutes any conduct in the workplace that is of a sexual nature and is both unwelcome and creates a hostile or offensive working environment. Based on this definition, there are two components that must both be present for sexual harassment to exist.

Second, the unwanted sexual conduct makes the victim uncomfortable to the extent that it interferes with work or creates an intimidating, offensive or hostile work environment. This is a broad concept and can include anything of a sexual nature that intimidates or offends the victim.

There are two types of sexual harassment, quid pro quo and hostile work environment. Quid pro quo is a Latin term that translates to “something for something” and refers to a situation where an employment action is directly tied to a sexual favor. The classic example of quid pro quo sexual harassment occurs when a boss tells a subordinate that she must sleep with him if she wants to keep her job, receive a promotion or get a raise.