If you were injured while riding a bus in Nevada, contact experienced Las Vegas bus accident lawyer Craig Murphy for a free one-on-one consultation. He has helped countless victims recover compensation for their RTC transit bus injuries.

Now that gas prices nationwide are slowly creeping higher, many residents of Las Vegas and its suburbs in Clark County are switching to buses in order to sidestep the additional costs of private transit. Southern Nevada’s line of RTC buses make up the majority of public transit in the Las Vegas metro area, and almost 180,000 commuters across the region ride at least one RTC transit bus each day. School buses and tour buses are also everyday sights on the roads of Las Vegas, allowing students and vacationers alike to travel throughout the city. 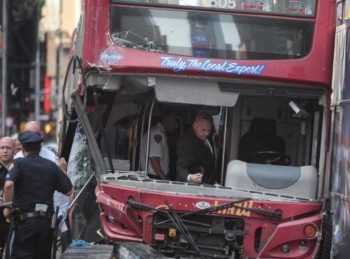 Despite the fact that an increase in public transit use means fewer vehicles are on the road, buses can still become involved in accidents. In the year 2010, there were 435 accidents in the state of Nevada that involved buses, and though there was only one bus accident-related fatality, over 100 of these accidents resulted in injuries to passengers, drivers, and/or pedestrians.

You should consider contacting an experienced Las Vegas bus accident lawyer if you have been involved in a collision, as the sooner you seek attorney representation, the sooner you will be able to receive the compensation that you deserve. Whether you were a passenger on a bus involved in an accident or the driver of a private vehicle that collided with a bus, dedicated Las Vegas bus accident lawyer Craig Murphy would be glad to provide you with the guidance and support that you need as you pursue legal action.

What Are the Most Frequent Causes of Bus Accidents?

Bus accidents occur when a public transit bus, school bus, or similar commercial vehicle crashes into a pedestrian, an animal, a non-moving object, or another motor vehicle. The causes of these accidents are diverse, and any combination of factors can result in a bus accident. The most common basis is human error; bus drivers, passengers, passersby, or other nearby drivers may make unsafe choices that spur a collision. A pedestrian may suddenly wander onto the road, leading the bus driver either to strike the pedestrian by accident or to swerve out of the way and collide with a nearby car or object. The bus driver or the driver of a car close by may engage in reckless driving, triggering a crash when one of the vehicles stops short or abruptly changes lanes. Buses tend to make wide turns, and a car that fails to yield to a turning bus can easily cause a crash. Though a rare occurrence, a bus driver may be too tired to focus or too intoxicated to effectively operate the bus, and even a split second’s worth of distraction may have major consequences.

Many bus accidents, however, have little to do with the actions of the bus driver or other parties. Though inclement weather is uncommon in Las Vegas and its suburbs, a sudden thunderstorm during the summer months can make roads slippery and reduce visibility. A bus may collide with another vehicle if it has been improperly maintained; brakes may fail, the driver could lose steering, or a tire may blow out, sending the bus careening into another vehicle, or vice versa.

Because “bus accident” is an umbrella term, it can refer to motor vehicle collisions as well as to injuries brought on by faulty equipment inside a bus itself. A wheelchair lift can unexpectedly stall, stranding a passenger with a disability outside the bus in the hot Las Vegas sun. A bus seat can become dislodged, forcing a passenger to fly forward. A handle may come loose or break, instantly leaving standing commuters with nothing to hold onto as they stumble around. These are but a few examples of the many potential problems that can lead to injuries in an onboard bus accident.

Could I Potentially Be at Fault in a Bus Accident?

It is rare for a pedestrian or passenger to be responsible for a bus accident. The fault instead is typically that of the bus driver, a third-party driver, the bus company, the bus manufacturer, the company that maintains and repairs the bus, and even the school district or city government. An unruly passenger or careless pedestrian may distract the bus driver long enough to cause an accident, but the majority of cases are based on the failure of buses’ operators or owners to follow safety precautions.

The state of Nevada as well as the entire United States use a term called “duty of care” in personal injury lawsuits. Where motor vehicle collisions are concerned, duty of care entails that drivers, auto manufacturers, and maintenance personnel and must follow all protocols to ensure that all vehicles on the road are safe to use and carefully operated. Dereliction of this duty can constitute negligence, a common element of all types of personal injury lawsuits.

As in car accident cases, it is imperative that you work to collect as much evidence as you can once the bus accident has occurred. Take photos, collect the contact information of witnesses, and record notes about the details of the accident. Unlike in car accident cases, though, the company that manages the bus will soon step in, conduct an investigation of its own, and try to argue that it is barely or not at all liable for the bus accident. Though the statute of limitations to file personal injury cases in the Las Vegas area is two years, the longer that you wait to file, the easier it will be for the bus company’s representative to selectively collect information that can absolve them of responsibility.

If you have been injured in a bus accident in Las Vegas, the Las Vegas metro area, or elsewhere in Nevada, time is of the essence to seek compensation for your injuries. Bus companies have a duty to ensure safe passage for the schoolchildren, commuters, and tourists that rely on buses for transportation, and it is your job to make these companies pay the penalty when they fail. Whether you are a Las Vegas resident or a vacationer, Las Vegas bus accident lawyer Craig Murphy would be glad to help you in your case if you were injured in the Las Vegas area by a bus.