Every May, with the start of the summer driving season, the state of Nevada kicks off Motorcycle Safety Awareness Month. Though Las Vegas’s urban sprawl and year-round warm temperatures make driving a necessity in the city, there is a three-month period between Memorial Day and Labor Day when motor vehicle accidents, particularly motorcycle accidents, spike. During this time of year, known as the 100 Deadliest Days, motorcyclists and all drivers have to take extra precautions behind the wheel. With more cars on the road during the summer driving season, it is imperative that motorcycle drivers be aware of the elevated risk of accident that will come when they take to the roads in summer. 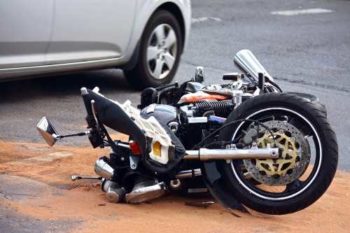 Most Common Causes of Motorcycle Accidents

Motorcycle accidents across the state of Nevada fall into two general categories: those caused by human error and those due to external forces. Where human error-related accidents are concerned, many such collisions stem from the fact that motorcycles and cars follow different rules when on the road. From the perspective of the driver of a car, a motorcycle or bicycle may be all but invisible under certain circumstances. If the driver does not notice a motorcycle just a few feet away, one inadvertently hidden in the car’s blind spot, the car can suddenly turn, causing a collision with the motorcycle. Alternatively, the driver of the car may falsely believe that he or she, rather than the motorcyclist, has the right of way, and this can be a recipe for disaster.

Even when both drivers are familiar with the right-of-way laws, crashes can still occur when either driver is unable to concentrate on the road. Distracted driving is a major cause of all types of motor vehicle accidents across the United States, and because cars and motorcycles travel so quickly, a split-second lapse of attention can have deadly consequences. Nevada may have instituted a handheld cell phone ban in 2011, but that has not stopped drivers from causing accidents when they send text messages or make phone calls while behind the wheel.

The Las Vegas metro area, due to its location in the desert, may be devoid of snow and most rainfall, but that does not mean that the sunlight and the heat are not regular contributors to poor visibility. A glare emanating from the asphalt is more than enough to prevent drivers from seeing clearly, and a motorcyclist temporarily blinded by the light can easily cause an accident. The excessive light and heat can also cause fatigue, resulting in clouded thoughts and slower reaction times. Even though inclement weather, a common cause of motor vehicle accidents, is nearly absent from the Las Vegas region, the climate can still play a major role in causing motorcycle accidents.

It is a sobering fact that driving under the influence remains a significant factor in motor vehicle collisions. Consuming alcohol or drugs in the hours prior to driving is all but certain to end in disaster. Approximately one thousand people die each year in the state of Nevada because of drunk drivers, and motorcycle accidents are one of many possible scenarios in which drunk driving can cause injury, if not death.

How Do Motorcycle Accident Cases Tend to Proceed?

After a collision, once all parties involved have each contacted a Las Vegas motorcycle accident attorney, legal proceedings can begin. The motorcyclist may be required to provide documentation to prove that the motorcycle has received proper care and maintenance, as mechanical failure is a recurrent culprit in motorcycle accidents. Any and all photos taken of the scene of the collision will be of critical importance, and so will accounts from witnesses. Because one of the primary goals of any personal injury lawsuit is to be awarded compensation, documents such as communication with insurance companies, statements from physicians, and copies of medical bills will factor into the eventual settlement. Be sure to provide as many of these documents as possible to your motorcycle accident attorney early on so that your case can proceed more smoothly.

All motor vehicle collisions, however minor, can become important and life-changing experiences. Whether you were injured by a motorcycle or while riding your own motorcycle, you should not downplay the severity of the situation. Dedicated Las Vegas motorcycle accident attorney Craig Murphy has helped clients throughout the Las Vegas area for decades to receive the compensation that they deserved following a collision. If you have recently been injured and are considering beginning a personal injury case, contact our law office today for a free one-on-one consultation with dedicated Las Vegas motorcycle accident attorney Craig Murphy.